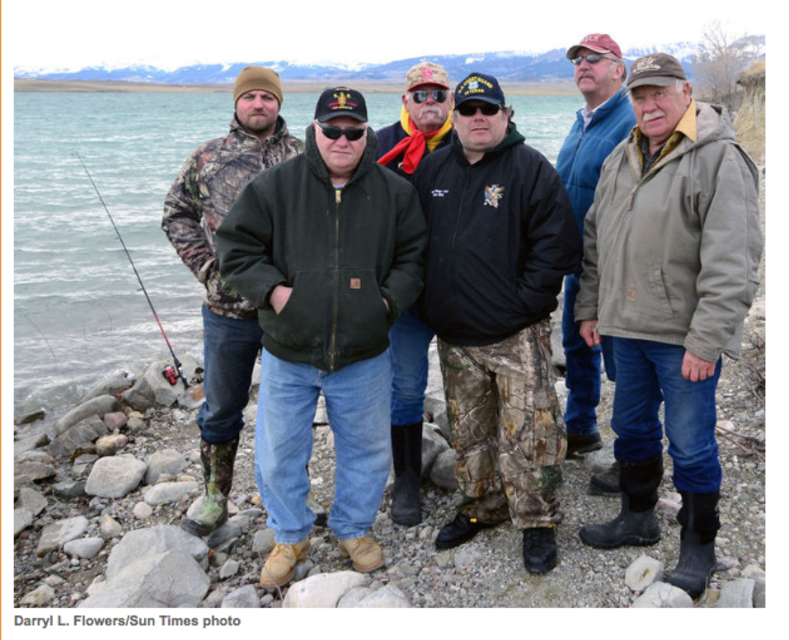 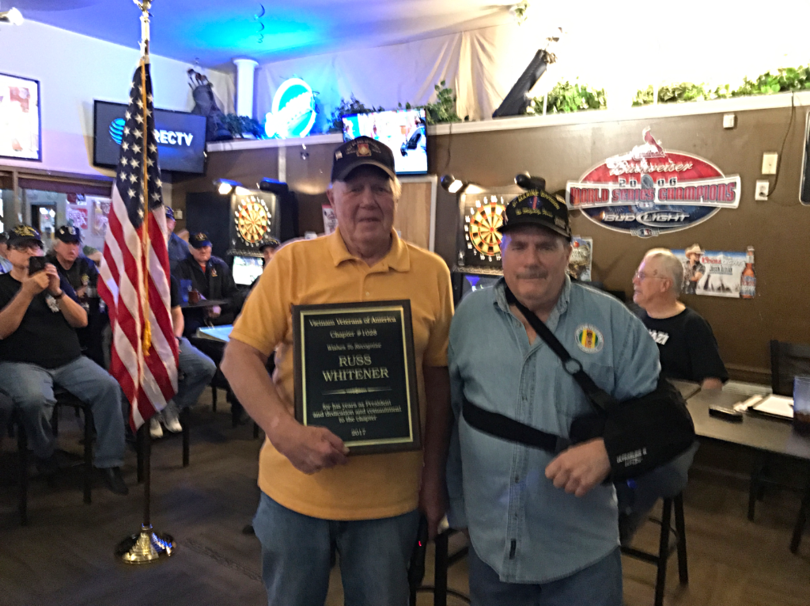 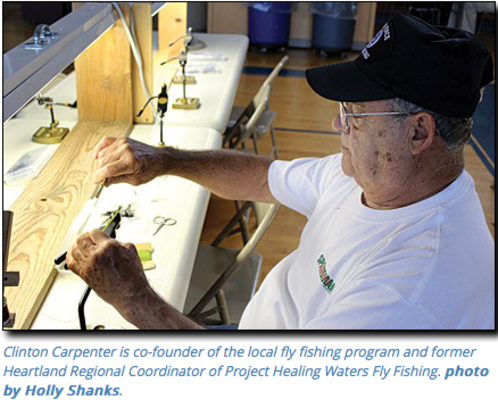 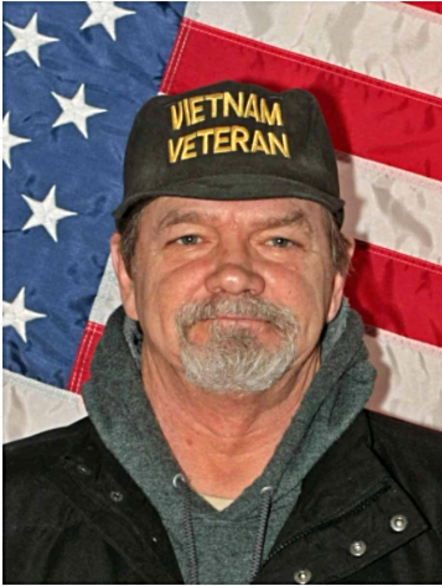 Julieann Najar, founder of A Soldier's Wish List, spoke to our group about ASWL and expressed her thanks for the Chapter's support.

The photos and article below were provided by Daryl L. Flowers and the Fairfield Sun Times

Sadly, we lost two members recently; Richard Scharlott in April and Charles "Chuck" Johns in May

The following photos and article appeared in the May 26th edition of the South County Times courtesy of Holly Shanks.  Ken House is a member of our Chapter and has been a devoted  supporter of Healing Waters and the work they do at Jefferson Barracks.  The Chapter is proud to list Healing Waters as one of our core charities that we help. 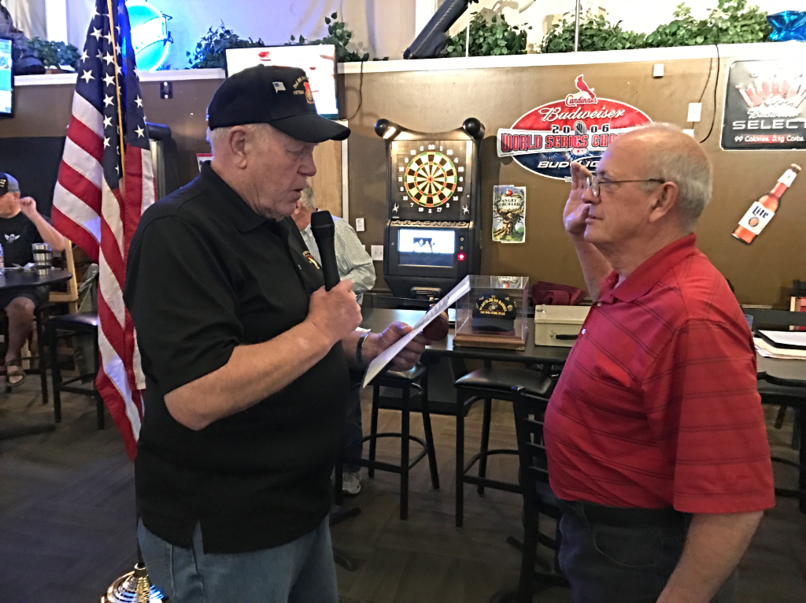 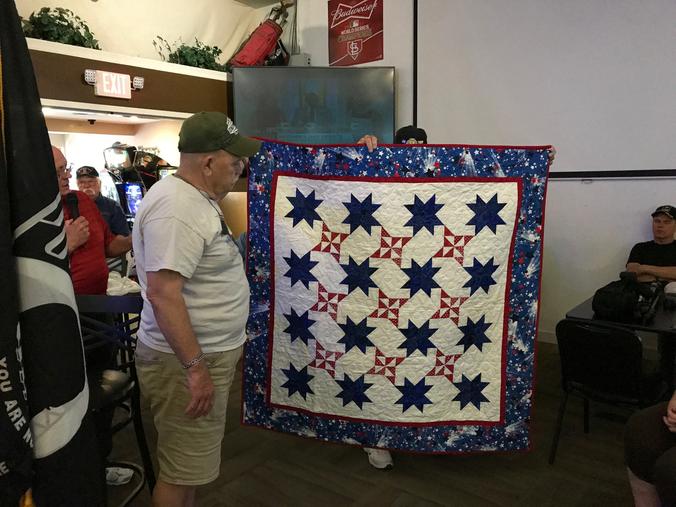 Look who's back!  Mike Erxleben continues with his recovery after his accident. 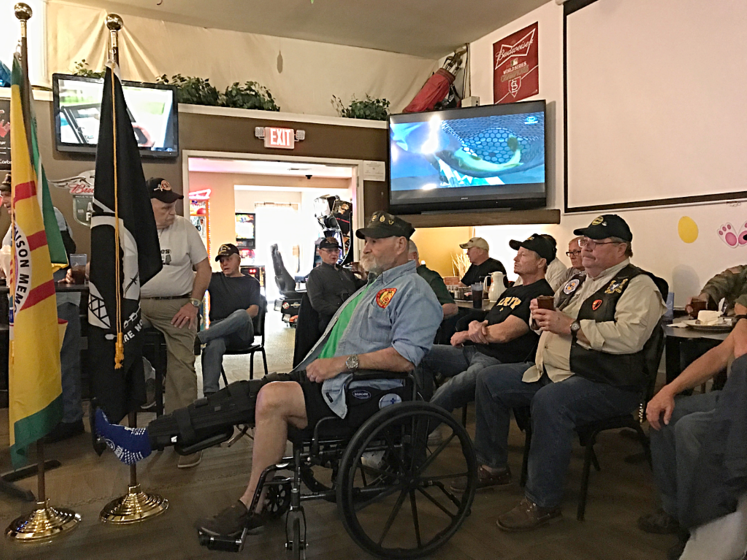 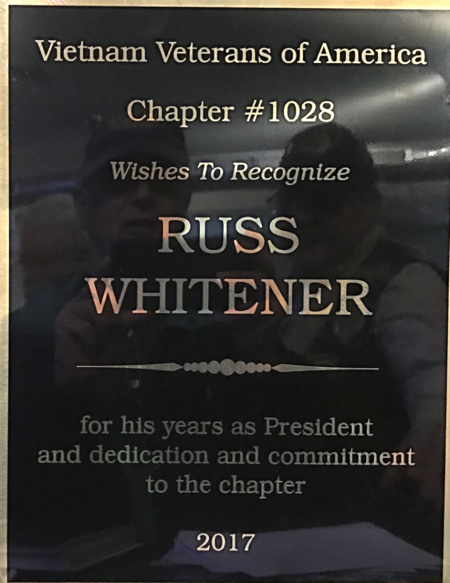 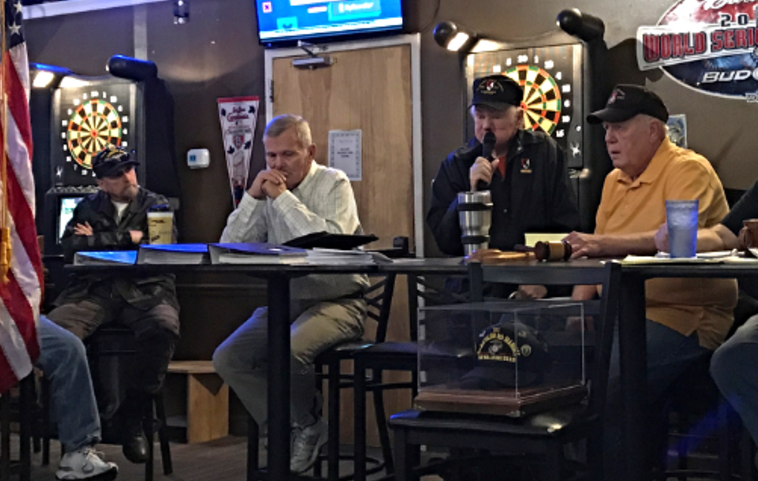 After serving two terms as Chapter President, Russ Whitener is retiring. During his time in office the Chapter has grown to over 200 members. With his leadership the Chapter has become more active in serving  veterans and the community. Russ, to quote Gary Hutchison, the inspiration of our Chapter,  "You've done good."

​On May 27th we held fundraisers at the Wildwood Dierbergs and the Manchester Highlands Walmart.  We also worked the Highlands Walmart on the 28th. As usual, we are very appreciative of the store's management and thankful for their patron's generosity.  Below are photos of our dedicated volunteers who sacrificed part of their holiday weekend to make this fundraising effort a success. 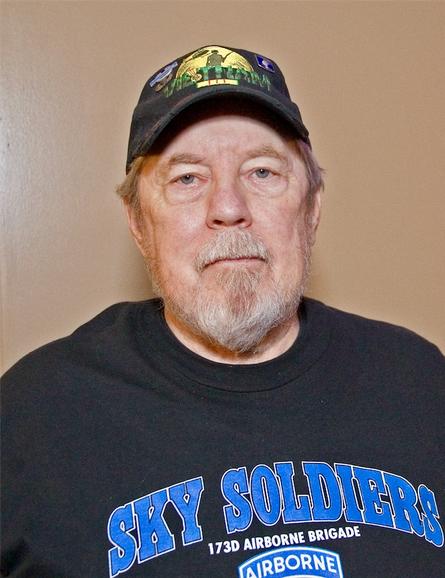 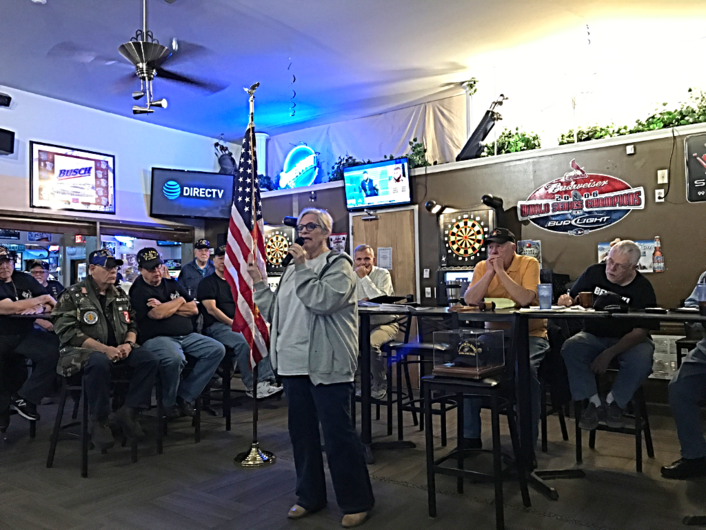 Fred Dishner displays a quilt from the ladies of Quilts of Valor.  The quilt is to be presented to Paul Lehnard at a later date.

Chief Master Sgt. Clinton Carpenter, a Vietnam veteran, retired from the U.S. Air Force in 1987 after 25 years of service. After reading about a fly fishing program for veterans, he decided to dedicate his time and serve again by helping other veterans and military members.

Several times a year program volunteers take veterans to outdoor areas to test their hand-made flies and new fly fishing skills. Flies are non-barbed hooks encased with materials that imitate natural bait for fish, like trout. Carpenter said he runs for his camera to capture the moment each time participants catch their first fish before releasing it back into the water.

"The look on their faces you would not believe. We've had veterans throw their fishing rod on the ground, grab the line with their hands and pull the fish in rather than use the fly rod because they're so excited," Carpenter said. "Now that's excitement. And that's what their faces look like — just pure excitement."

There is never any charge to veterans. Much of the funding for the program comes from Project Healing Waters Fly Fishing, Missouri Troutbusters, VVA 1028 in Fenton, T. Hargrove Fly Fishing Inc., 9024 Manchester, and Feather-Craft St. Louis Fly Shop, 8307 Manchester.

One fundraiser for the program is called Healing Saturday. The annual November event is hosted by Feather-Craft St. Louis Fly Shop. The event originated locally and has spread nationwide.

Ken House of Sappington is a program volunteer and assistant program lead. He is also a member of the Vietnam Veterans of America Chapter 1028 in Fenton. He said participants in the program range in age, but most are over 30. The veterans face varying issues, including post traumatic stress disorder, substance abuse, or burn injuries. The program has special equipment to allow for an amputee to participate as well.
The number of participants each week can range from two to more than 20.

Carpenter said tying flies requires mental concentration, and the repetitive motions of fly tying help with dexterity. Fly fishing can be enjoyed by veterans after they leave the VA hospital, Carpenter added.

House said volunteers never inquire as to why participants are at the VA hospital. The goal is simply to provide them with a beneficial experience without any negativity. Many veterans are reluctant to attend a session at first, but the reluctance soon turns to enthusiasm.

"A lot of the participants have lost some of their sense of value," House said. "They have fallen out of mainstream society and feel they do not really provide anything worthwhile that would benefit anybody."

The program takes their minds away from the bad experiences and helps move them forward to something better, according to House. Many participants are skeptical they can create a fly at first. But once they produce something positive with their own hands their attitude starts to turn around.

"When they get out on a stream and catch a fish with a fly that they have tied, or a rod they built, that's pretty much the point of the mountain right there. You know that you're pretty much having a good experience with what your abilities have produced," House said. "To see the smile and the pleasure they get out of that on their face – it brings tears to your eyes."

Any veteran or current military member, disabled or not, is welcome to join or visit the Project Healing Waters Fly Fishing sessions that take place every Monday evening starting at 6 p.m., in the Jefferson Barracks medical facility gym building 61.

In April, two vets traveled to Montana for some "Big Sky" therapy. The vets were welcomed into the Augusta home of Chapter member Greg     " Cowboy" Grass who also resides in St. Louis.  Greg has previously hosted other veterans at his Montana residence in years past. Accompanying the group this year was another Chapter member Mike Lange who is also a board member of Camp Valor Outdoors.  The hospitality and comradeship extended to our fellow vets by Greg and Mike exemplify the very credo of the VVA: "Veterans helping Veterans." 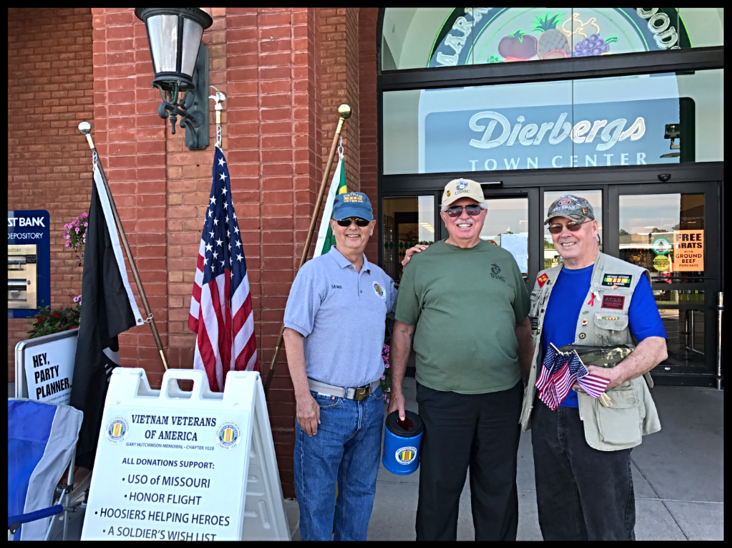 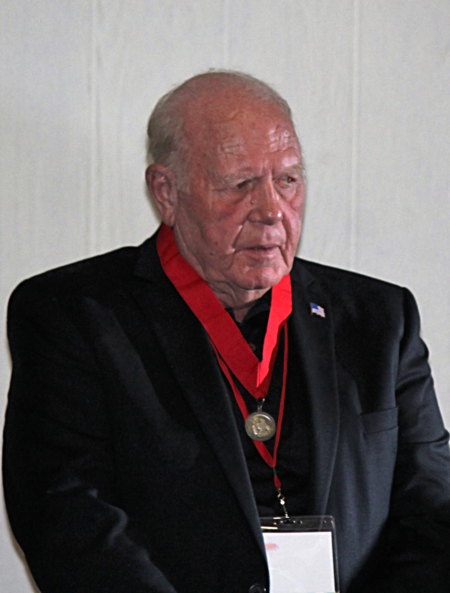 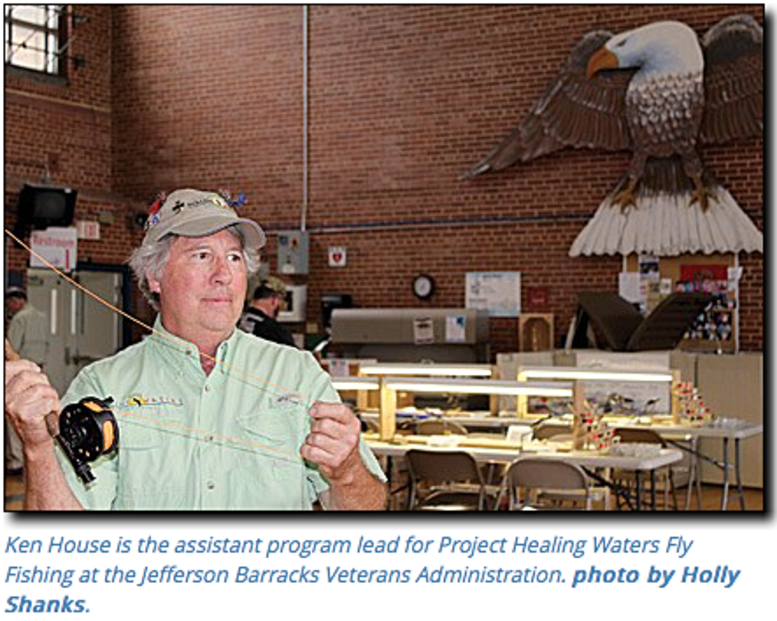 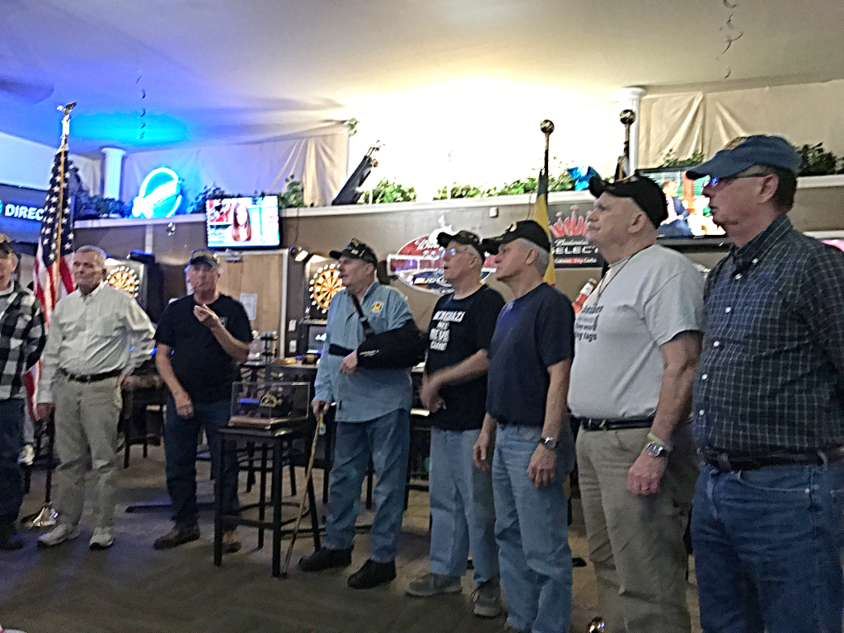 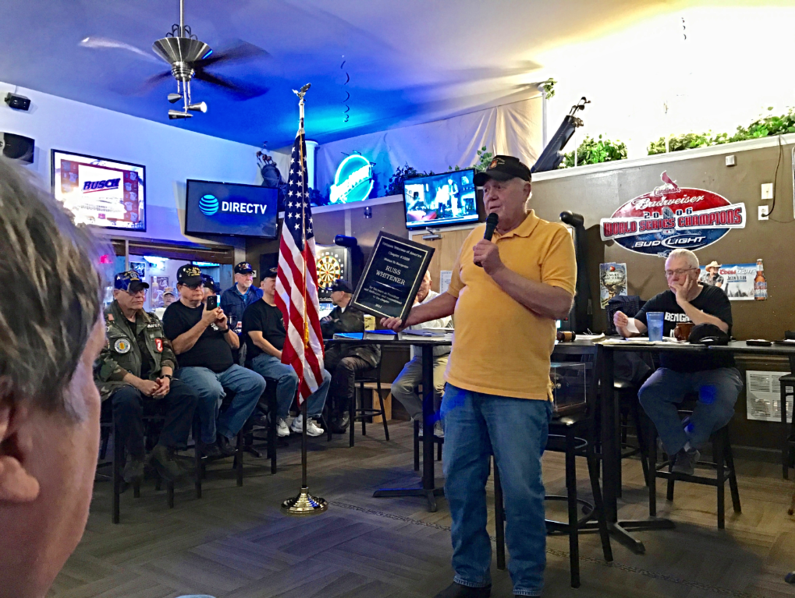