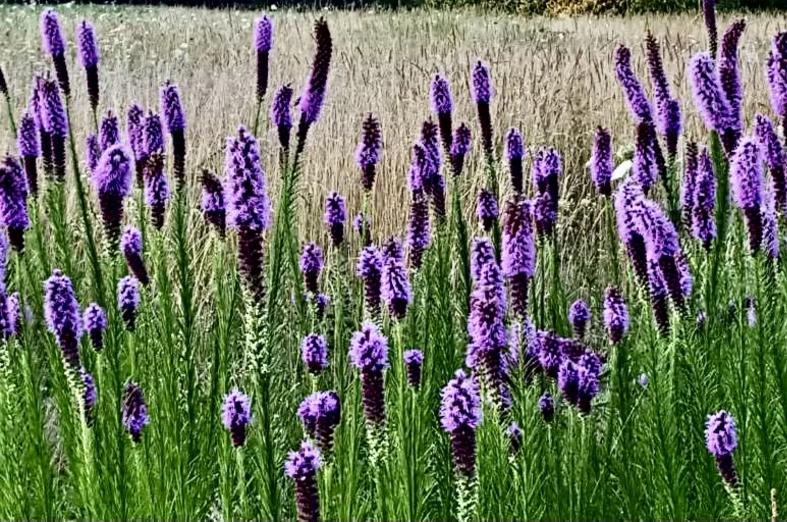 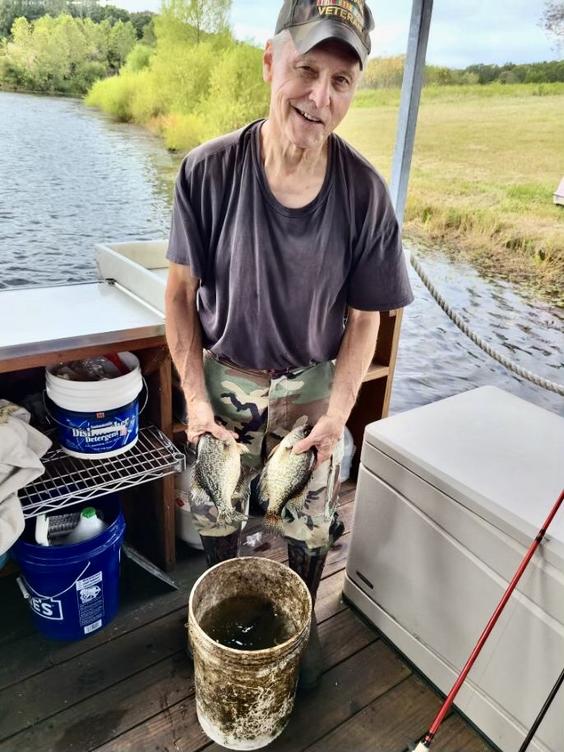 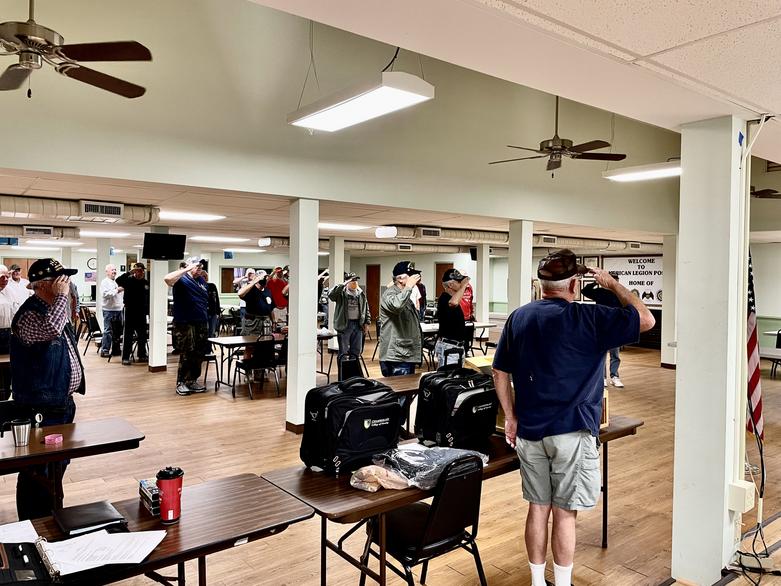 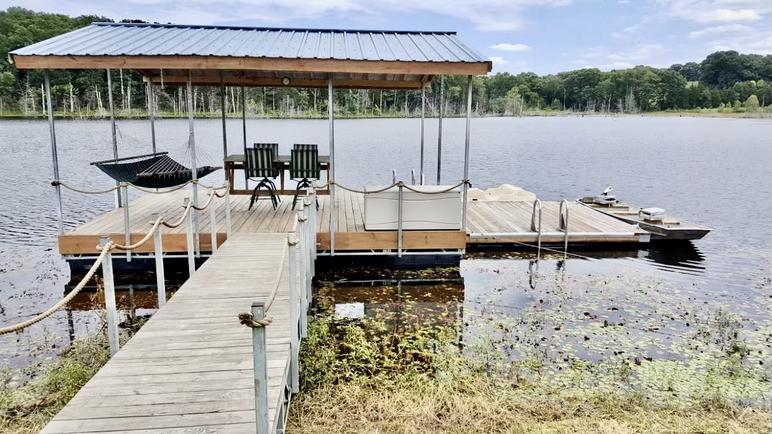 Tom Becker's covered boat dock has a small bar in the middle with a fish cleaning station on the front right corner. 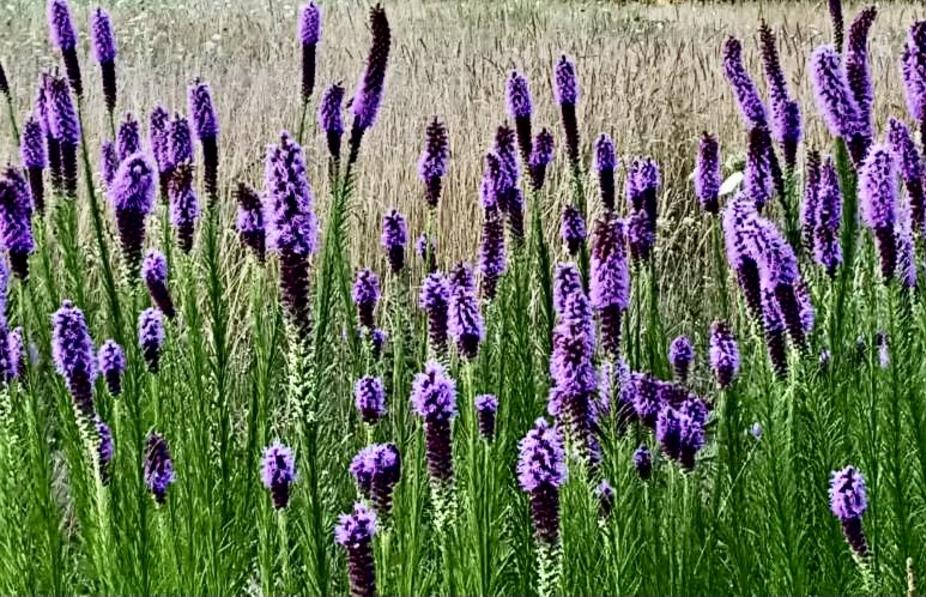 On Friday, October 1st eight members from the chapter went fishing in Tom Becker’s lake South of Herman, Missouri.  Those attending were Dan Crowe, Bob Hanak, Tom Oplt, Mike Lumma, Walt Glover, Rick Kerman,  Bill DeArmond, and Jim Weible who also brought his son in law Jeff Campbell.  About half of us arrived by 7:30, and started fishing immediately.  It was a rainy morning misting on us early before becoming mostly cloudy which is ideal for fishing. Bob Hank and I (Bill D.) walked down about ¼ mile toward the dam and fished the banks in and around a little cove.  By 10 a.m. we probably had 30 bass, hybrid bluegill and crappie.  I finally walked around the cove through the grove of trees, and fished the other side where I caught at least 30 more.  Jim Weible and his son in law Jeff came down and joined us.  I almost got tired of catching fish if that’s possible, and worked my way around to Bob Hanak who graciously let me empty my stringer twice into his basket.  At that point I was done fishing, and walked up to get my fillet knife.  Three times that  morning Tom Becker took small groups of the guys out fishing from his pontoon boat powered by a small outboard engine.  Tom Oplt says that he hooked a giant bass that went around three sides of the pontoon boat before snapping his line.  I filleted fish for more than an hour with some assistance from Bob Hanak and Tom Oplt who attempted to teach Walt Glover how to fillet.  Walt (AKA Samurai Filleter) is the only person in the world to fillet a 10 inch hybrid bluegill, and get a one inch square fillet.  Tom Becker fried up a good portion of the fish along with a few pounds of potatoes.  Walt Glover brought coleslaw and someone made brownies.  This is the ONLY way to eat fish; half hour after they are swimming in the lake. There was so much fish that all took home fresh fish fillets. I would encourage more of you to join us next year if the invitation is again extended to us.  A special THANK YOU to Tom Becker for having us out.  All of us enjoyed the day immensely.       Bill DeArmond

Dan Crowe pictured with the majority of fish they cleaned. 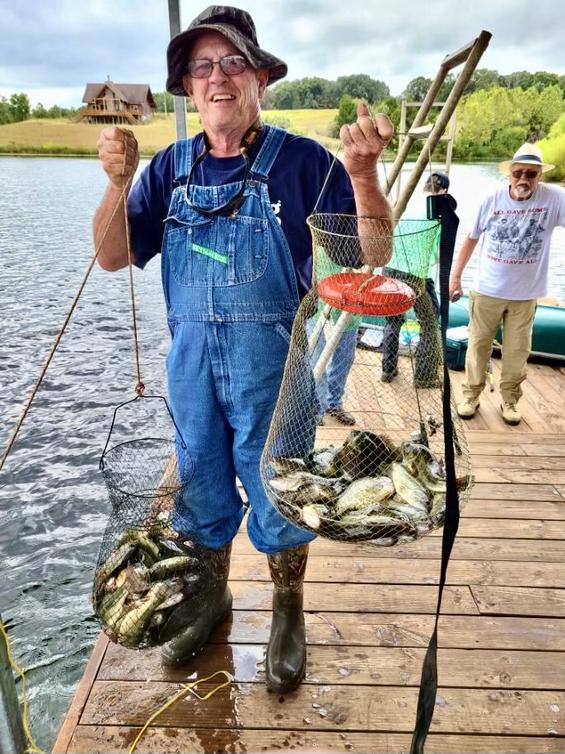 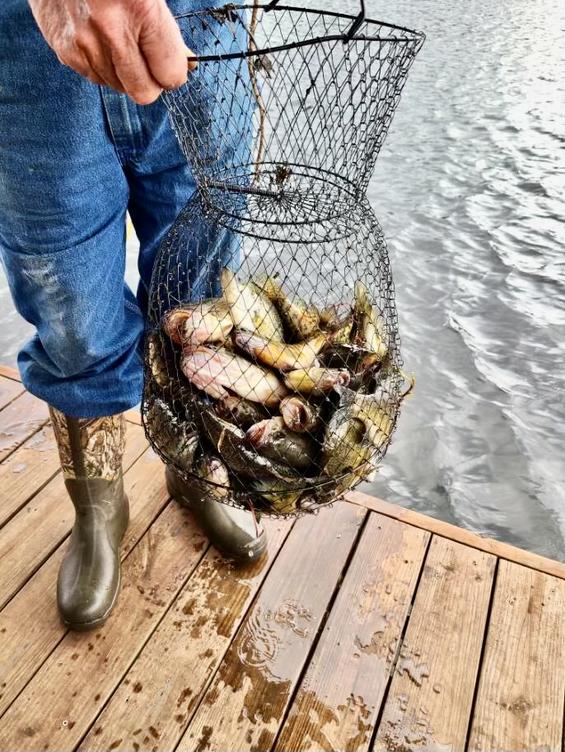 Pledge of Allegience to start the Meeting

DeArmond with two of the big slab crappie they cleaned for lunch or take home.